Today I made another version of Vogue 8670, this time in a purple-y animal print. I really love this fabric, and after wearing my grey version the other day, I thought I’d really like to have another version of this particular shirt. I did the neckline exactly the same way, because I liked it so much on the first one, though now that it’s finished I kind of wish on this one I’d have used a bigger collar instead. Oh well. And for the record? I’m still not sure why this pattern gets no respect. I think it is probably on it’s way to TNT status for me.

Are you grumbling about a lack of picture? Well, no worries, I’m already on top of that. 😉 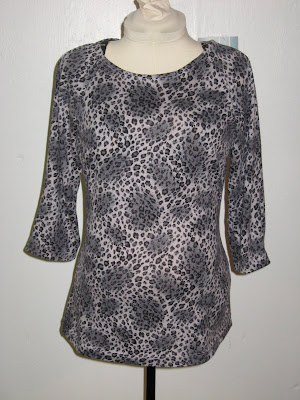 I don’t actually know what’s up next. I’m thinking I’d like to make up some lingerie for myself, but there’s also this pesky gift-exchanging holiday coming up where you have to give stuff to other people, and I suppose I’ll probably make a couple of things for that as well. Not too many though, since I’ve discovered that I’m a bit thin-skinned about how people accept the stuff I put a lot of work into. 😳 I thought I had an idea for my SIL (a nightie, since she lives in the dorms), but my MIL suggests that perhaps Burda’s 11/2009 #134 may not be modest enough. So, I’m not sure what to do on that front.