It’s kind of embarassing how addicting it can be to sew up underwear. They’re super easy, take almost no time, and give you a bit of that instant gratification. But, there’s only so many undies a girl needs in her drawer…so these will be the last two for a while anyway, though it won’t be the end of my lingerie sewing.

First up, another thong. (And yeah, I am well aware that these didn’t press worth a damn.) 😦 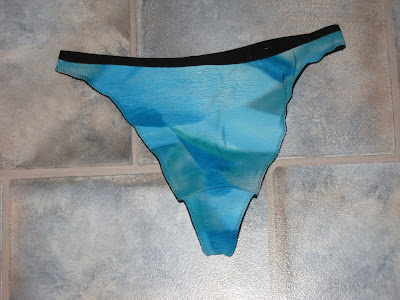 I made a few changes. These have about 1/2″ less rise, and I think I could go a bit more if I wanted to be really picky. I also slimmed up the crack strap, because I thought I might like them a bit better that way. This was also my first time of using fold over elastic (FOE) in its intended manner. It’s not too bad, but heaven help you if you goof up your quartering!

Next up we have a version of View B. 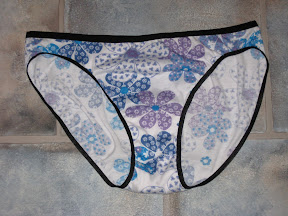 I made a couple changes to these too. I’m not sure what kind of woman these were drafted for, but my groin area isn’t anywhere near as wide as they assumed. I shaved about an inch and a half off the width, and I think I could realistically take about another 3/4″ off. We’ll have to see when they come out of the wash. I also made a note that I needed to increase the elastic length to accomodate the new bigger leg openings after the width adjustment was made–I’m guessing around 2″ per leg. Since I used the FOE for both waistband and leg openings, I trimmed off the seam allowances. We’ll see if I plan to trim down the waist even more or not.

Next up is either the HP Cupid Cami & Tap Pants or the Burda 11/2009 variation of same. I’ll have to look at pattern reviews for the HP pattern and see if I want to risk it.