So after finishing my last knockoff, I started to tackle this one: 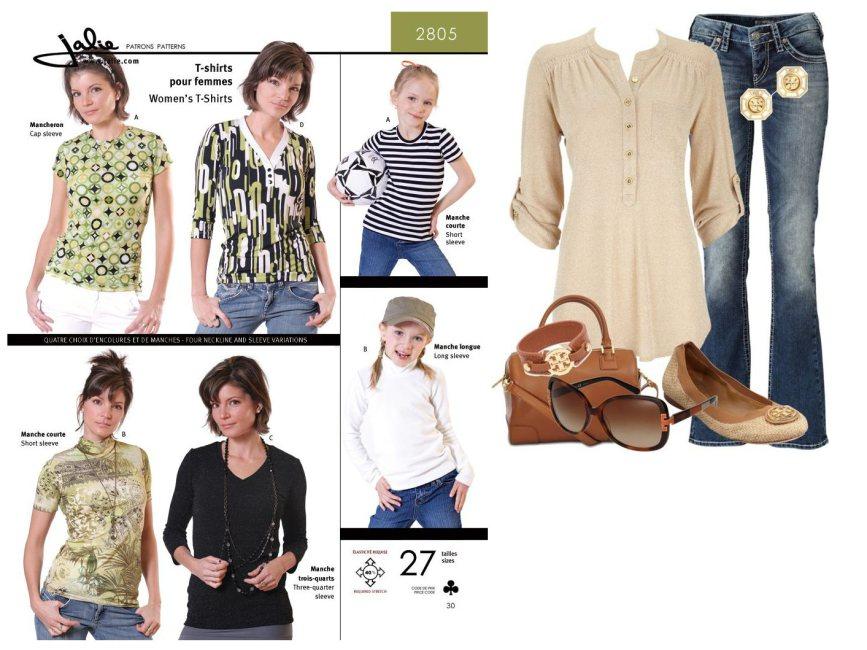 I originally planned to make this in a cream colored rayon knit, but when I finished my hot pink muslin monstrosity I discovered that I didn’t have nearly enough for this project. Which is probably for the best anyway, because mom+white shirt is sure to equal disaster. So I picked up a slubby tissue knit at the big green J, and hoped for the best.

For once, I had zero issues. Well, I take that back. I struggled with the neck band one night, picking it out and restitching it two or three times and still not “getting it”. But the next morning it all became much clearer, and I got it sewed on the first try–must learn to quit when I’m tired!

Sadly though, this blouse shrunk after washing, so now it’s nearly a belly shirt. And believe me, no one needs/wants to see the belly on this mama. It also got some little holes, so I’ll probably just wear it around the house until the holes get to the point of being really noticeable. Also, it’s got some wrinkles on the sleeves that I’m not too keen on–it’s like the sleeve is twisting, but I’m not sure why.

OK, so it’s not a belly shirt with my arms down, but there’s a lot of “peekage” when my arms are up!

Can you see the twisting on the sleeve?

Regardless, I’m going to pat myself on the back a little bit. I managed to get through three (THREE!!) of my knockoffs! Usually, when I set up some sort of sewing “plan” for myself, it immediately gets dumped in favor of something else (no one tells me what to sew–not even me!). So I’m glad to see that I can stick to a plan, and glad that I have some new shirts to wear, because my closet was getting to be kind of pitiful. I did ultimately change my mind on the last one, I’m not going to make it, or at least not right now. I’m ready to start sewing up stuff for spring/summer, or at least stuff with shorter sleeves.

Here’s to making more plans and sticking to them in the future! 🙂

One thought on “Knockoff #3 or my dedication astounds even me…”