I had recently run out of Clorox Anywhere (love that stuff!), and decided that though I love it, I wasn’t willing to shell out the rather exorbitant price for it. So, I turned to my friend “Google”, and searched for it.

Lo and behold, I found a recipe for it. 🙂

I reused the bottle that my storebought version was in, and it looks as though the “recipe” author did as well. Way cheaper than buying a new bottle since you likely have a $2 bottle of bleach around anyway. 🙂 Hope that helps you!

The carpet is in! Installing it ourselves wasn’t quite as bad as I thought it would be. You can see some of my seams, but honestly, I’m not that concerned about it. It’s a family room using recycled carpet, so it wasn’t ever going to be featured in Better Homes and Gardens or anything. If there was such a thing as “Cheapskate Magazine”, we might fit there, since the project has only cost $20 and some time so far.

Right now we’re trying to decide on paint colors while we’re still in “remodel mode”. I just think it makes sense to paint the walls before moving the furniture back in. And since we don’t have any tack strips, I’m just going to roll the carpet back a few feet along where I’m painting to keep it from getting any drips or spills.

The biggest question is color. I’m trying to choose between about 3 colors for the walls. All are fairly light colors which will work well with the not-so-ideal lighting situation (it only looks bright now because there’s no leaves on the trees outside yet). I’m also trying to decide if I want to paint all 4 walls the same color, or leave 1 or 2 white. The room is a really long rectangle (35′ long x 13′ wide) and I’m afraid that all the paint is either going to break the bank or just be overwhelming once it’s finished. And, based on my experience in the sewing room, the 3 concrete walls are going to take color differently than the one sheetrock one (sheetrock on the right).

After carpet, before paint

Here are my color options (not that they seem to be accurate): 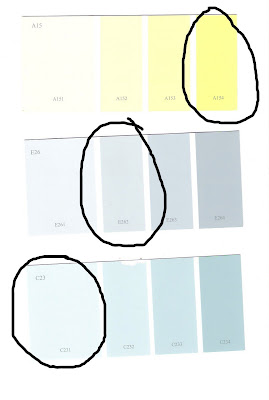 The yellow is a light sunny yellow, the middle color looks pretty accurate to me (it’s a kind of blue-grey), and the bottom one is a slightly darker/brighter shade than it shows up (almost a pale sea green IRL). If you’re going to a DoItBest hardware store anytime soon, they are A154~Banana Pop, C231~Misty Seas, & E262~Blue Burro. Currently I’m leaning toward the yellow or the sea green. 🙂

This week there has been no sewing, and not too much more cooking because we are doing a project. A very LARGE project. As other seamstresses can possibly relate, my sewing area is typically a complete mess. Right now we’re doing major basement cleanup though, so it’s all going neatly away. There are still a few pieces of fabric out (I don’t have enough storage in my fabric dresser for all of it!), but for the most part it’s pretty clean and neat. And there’s an excellent reason for that.

See, my sewing space has pretty much taken over a good-sized chunk of the big room in the basement (which is half the size of the house! :oops:) as well as the 10×10 “nonconforming bedroom” that was designated as a sewing room/guest room. But times are a changin’. See, my neighbor got their carpet replaced under warranty because it had a couple of wear spots in it after 2 years, and they kept the stuff they ripped out because her sister said that she wanted it. The sister then decided she didn’t want it, and so my neighbor has been storing the carpet in her basement “nonconforming bedroom” for almost a year. When she put new carpet in her basement a couple of weeks ago, we went over to check it out and she showed me the rolls of old carpet and said she was going to put it on Craigslist to get rid of it so that they could store their toddler son’s toys in that room. I thought “ah-ha!” and told her that after checking with my husband we’d probably want it.

We thought it would work fabulous for our basement even though it’s a thicker “modern shag” than what we would have chosen to put down there if we were paying for it. We figured for the price (free!) it would work just fine for our largely under-utilized basement space to cut down on the echo that we have from having tile floors and painted concrete walls. So currently we’re working on getting rid of stuff and moving everything else into my sewing room in preparation for putting down the carpet. Who knows? Maybe we’ll find ourselves spending more time down there (especially in the summer when it’s hot outside) as a family if it’s a comfortable place to visit. 🙂 Yay!

We’re also going to build some wall shelving for me to store my fabric on so that I can move my cutting table into the sewing room. Right now I have one of those short, wide dressers with 6 drawers and doors in the center holding most of it, but it takes up a whole wall in the sewing room, and makes it hard to arrange things so that everything fits in that one room. So we’ll be posting stuff on Craigslist or making a trip to Goodwill in the near future, and we’ll also probably rent a second dumpster for the next couple of weeks.

So after this novella, I’m going to head for bed. Hope ya’ll have a great rest of the week.

A few months ago, my husband’s workplace was clearing out some of their old stuff–office furniture–and I ended up with this:

Now, I’ll be the first to admit that this is an ugly chair. The upholstery is brown for Pete’s sake! It’s also grungy, which is easily fixed, but other than that, there is little wrong with it. It’s structurally sound (after I glue the front edge of the arm back to it’s post), the finish is in good condition (probably because it was so coated in gunk), and has very few scratches. And the bonus? It was free–it and 3 of its friends that are in similar shape, since no one wanted them, we got our pick of the last 7 chairs, and we took 3 like the one above and the 4th one is an old-school leather office chair in near perfect shape.

But, I digress….the point of this post is to ask whether or not I should add piping to the front edge (like what was on it originally). I’m kind of leaning towards the “not” because I’m lazy and don’t want to do the extra work (pathetic, huh?) In my defense though, I have this fabric:

that I found at Jo-Ann’s yesterday and I’m having the stripes run from front to back. I made the effort to make it so that the stripes would match up and I’m not sure I want to break up that matching with the piping. Whatcha think?

Today, we replaced the ceiling fan in our living room…I know, it’s not terribly exciting to everyone else, but it was a MAJOR upgrade for us. 😉 The old one was ugly, it didn’t work right (it was all–lights & fan–or nothing), and a royal pain to clean with those ugly little “wood weave” inserts in it. It looked kind of like this one (which is actually the one from the kitchen, but somewhat similar):

D & M, (my in-laws) were generous to us for our anniversary in April, and gave us a check big enough to cover the purchase of this fan. Thanks D & M!! Isn’t it perdy?

The new one has 5 blades instead of 4, is a 52″ span instead of 48″, moves a lot more air, and has 4 speeds instead of 3. I also prefer the silvertone over the hideous “aged bronze” or whatever the old one was. And it works like it should! Yay! No more unscrewing the light bulbs during the day to run the fan! 🙂 It’s even shorter (14″ from ceiling to the bottom of the lights instead of 16″) than the old one, so it’s easier to walk under with our short ceilinged “mid century ranch” AKA the “retro ranch”. 😉

We found it via Ace Hardware’s website, though we actually picked it up/paid for it at our local Ace Hardware, for around $105.

Compared to some others we looked at that we would have had to compromise on something to get, this one had all the features/requirements we needed (namely the height including the light kit and flush mount option) and was quite a bargain. Be warned though–it takes those little candelabra bulbs–they are 60W ones, so they are bright enough, but I don’t know of any florescent style bulbs (yet) that have such a small base in case that’s a deal breaker for you. Otherwise it’s perfect for those of us with the low ceilings that it’s so hard to find light fixtures/ceiling fans for.

Now if we could just buy about 3 more of these for the other rooms upstairs…. 😛

Now I’m off to put the old one on Freecycle (minus the light kit) in case someone who needs one wants it. 🙂

Today is my (26th) birthday, and Friday was our 5th (*whoa!*) wedding anniversary. My wonderful hubby has somehow managed to put up with all of my moodiness, quirks, and everything else for the past 5 years. 😉 In honor of the occasion, we made the *super* budget trip to Kansas City (sans kiddo) and got to do some wandering around the city. Unfortunately I missed out on the one fabric store that I was told to visit (Kallan’s???) which was a bummer since I was told that they have some fabulous fabric there. 😦

For the sake of readability, here’s the bullet points of where we went:

So yeah, it was a bummer to leave, there were a couple more things I’d have liked to have seen, but we think we’re going to try and go back sometime fairly soon with our son. There were a lot of activities for families that seemed interesting, and some of them were even free. Definitely a good way to celebrate, especially if you’re on a budget. 🙂 I’ll try to get some pictures up in the next couple of days or so.

I could elaborate, but really, I think the title and the picture pretty much say it all. LOL!

All that and, a big cardboard cutting mat for less than $30.

I found the cutest little straw hat for my kiddo today at the Salvation Army for 30 cents–he’s going to be the cutest little hobo ever! I also bought some cheap eye shadow to put on for “dirt” smudges. I’m so excited about Halloween! 🙂