My husband’s birthday is at the end of November. It has been on the same day as long as I’ve known him ;-), but for some reason, this year I struggled to get my gift for him done in time. As in, nothing would go right…it was as though I’d forgotten how to sew. SMH.

All I can say is thank goodness past me (because these fabrics were both in my stash for the last 4+ years) bought the full yardage recommended by the pattern! I wouldn’t have needed but about 2/3 as much, but all my goofs meant that the extra came in very handy! I guess the other thing that turned out really well was the sleeve plackets and my topstitching–both of those things are gorgeous on both shirts. Neither of them are something that anyone but me (and you–since you’ll get close-ups) will notice, but at least something turned out right! And all of this trouble on a TNT! I’ve made this pattern at least 6 or 8 times before!

Sleeve placket. I have to admit I find these slightly terrifying. Still have 3 to go. Wish me luck!! 😥 #sewing #sewcialist

#bpsewvember Skill Up. I need to improve my photography skills in a bad way. I have an amazing #lumiaicon that takes gorgeous pictures, and I also have a decent camera…so why can't I take decent pictures? The world may never know.

I only included ^ one because it shows the blue shirt in progress in the back–proof! 😛 (Trust me, it’ll make sense in a moment.)

So here are the pictures of the finished shirts, all ready to be worn by my wonderful husband:

OK, so this picture is actually from this post, but it’s the exact same pattern, fabric, and size. So I’m cheating by not retaking the pictures. Call me lazy if you’d like. 😉

In the end, I’m glad I did these. Hubby’s closet was getting rather shabby–all those clothes he’s been wearing since 8th grade (Grrr! I wish I could still wear stuff from that long ago!) are finally starting to wear out, and all at once too! If I had more time, I’d probably replace a few more in his wardrobe, but the money is the same whether I make ’em or buy ’em, and I’m a selfish seamstress at heart. 😉

Modeled slacks! With bonus Christmas shirt action! (Click on any pic for a “slideshow” type thingy with bigger pictures.)

BTW, I never really noticed until today that we really don’t have a lot of color in our house. 😕 I mean, it seemed like we did, but as far as colorful rooms where we have enough space to take pictures, nada. So still not great contrast (sorry, K-Line!), but at least you get to see them on something besides the floor, right?

Yes! Finally! I finished up those slacks (a mashup of KS 3267 and Jalie 2107) that I’ve been working on for my darling husband! I even learned something new while sewing these up: you CAN take a welt pocket back apart after you’ve cut it–if you’re vewy, vewy, caweful. 😉 The trick is to make sure that you restitch very close to the clipped corners, but that you don’t end up in the cut part…this sounds obvious, but it’s more tricky than you might think. The ridiculous part is that I was so afraid to take it apart that I tried every which way from Sunday trying to make it look like a welt pocket without taking it apart (I didn’t find an acceptable alternative method, BTW) when it was so much simpler just to take it completely apart and do it right. Sometimes I’m just a stubborn glutton for punishment, and I don’t know why.

And I have pictures! None of the recipient modeling them though, you get to see them on the lovely “floora” (freshly vacuumed even!) instead. 😛

Can you tell which pocket was the one that put me through my own personal hell? Me neither. 🙂

So, after that, I have to do my post project clean up and decide what to sew up next. I’m thinking a button-up blouse from Simplicity 7057 which I hunted down like it was…well, something that you hunt down, after seeing a picture of the envelope on Emily’s blog. I know, it was probably silly to chase it down over simply seeing the envelope cover, but well, raglan sleeves. I even have a crazy print to make a (hopefully) wearable muslin out of. It’ll either be awesome or awful….or a mix of both.

P.S. Do you think I used quite enough italics in this post? I must be feeling a bit stressed. 😛

I did manage to get this finished in time, he even wore it for Christmas Eve! 🙂 He looks pretty studly in yellow, so it’s a win. The only part I don’t like is that the fabric wrinkles like a bitch in the wash. 😦 Which is part of why it took so long to get pictures. I wasn’t too quick to get it ironed up. 😳 I even learned something new while making this, well, a few things actually.

Anyway, here it is: 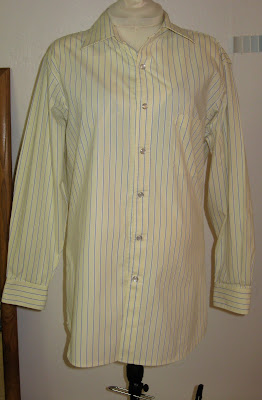 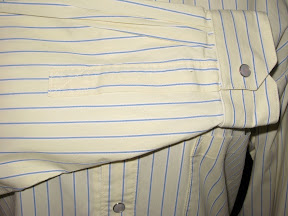 See? Not as pretty as the pointed ones. 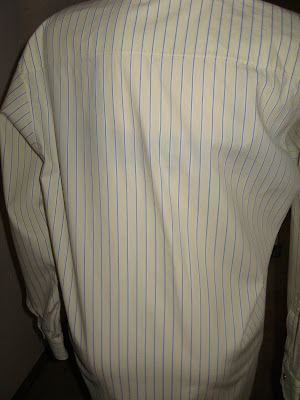 Someday I'll get brave enough to cut the yoke stripes the other way.

Even though it’s not perfect, I’m pretty happy with the way it turned out. It looks good on him, and fits him nicely, so I think it’ll get a fair amount of wear. Maybe not as much as it would if it were blue, but there’s only so many blue shirts a guy can have in his closet. 😉 I still can’t believe it went from uncut to finished in like 2 days. That’s really fast for me.

OK, now that he’s gone, I’m pretty excited. I’m working on another KS men’s shirt for him, this time in a very pale yellow with blue and white stripes. I started this on….oh….Tuesday, so it’s been a bit of a rush, but I think I’m going to make it. I am using the Pro-woven interfacing from Fashion Sewing Supply, and wow! It’s kind of stiff, hopefully it will work out in the end though. One word of advice though–don’t use starch to make the shirting easier to cut–apparently even the miniscule amount of starch made the interfacing not want to stick very well. I have had to “reapply” it about 3 times. Hopefully a good press after it’s washed will make it stick once and for all. If nothing else, I guess it makes a good sew-in interfacing, right? I hope so.

We open presents tomorrow evening, so I’ll plan to take some finished pictures (fingers crossed!!) then–perhaps even modeled!! But mainly I wanted to share the two tutorials I used to make the sleeve plackets because 1) I wanted record of them for future reference, & 2) you guys need to use this method if you aren’t already. It worked like a charm, though I will confess that my first placket wasn’t nearly as pretty as my second one for some reason. No one but me would likely notice though, so I’m just going to go with it. Don’t let the good be the enemy of the perfect and all that.

Well, I suppose that’s it for now, I should probably head back to my little sweatshop and put the collar and on. Then it’s just , snaps, and done! 🙂 As of 10 p.m., I just need to do the collar and the snaps. I can see the end of the tunnel! 😉