I finished the second Lekala nightie yesterday. I think it turned out pretty cute, if not a bit risque for the average run-of-the-mill sleepwear. I’ll have to remember that next time I make something that I’m not planning to use for seduction of the hubby. 😉 Honestly though, I probably won’t make this one again. There are a lot of other variations out there to try, and this one, while cute, is kind of a lot of work for what it is. Though, I may just be being naive, maybe they are all a lot of work for such a flimsy piece of fabric. That might explain the pricetag they are generally accompanied by in the store. Anyway, here’s the pictures for you. 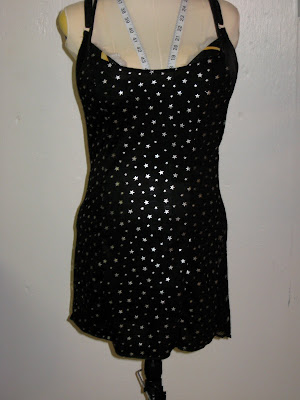 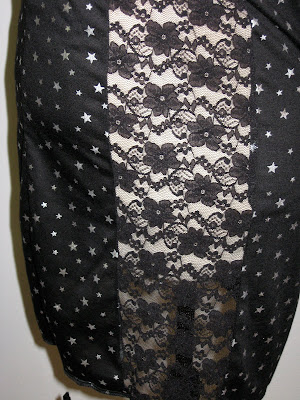 This was made using stretch lace and a jersey remnant from the stash. Based on the price still attached to the jersey remnant, I’d say this nightie cost around $8 to make. I still have enough of the jersey left to make a pair of panties and probably a bra if I want. There’s still quite a lot of the stretch lace left too. I used foldover elastic for the straps, and I think I made them about 1.5″ too long (I couldn’t remember from last time, so I just “winged it”.) I haven’t decided if I’m just going to leave it or if I’m going to fix it, guess I’ll know after I wear it a time or two. 😉

In other sewing news, I have traced off, cut out and partially sewn the pockets of some Burda shorts (113 of 7/2009 magazine). I think they are going to be a bit too short for my taste, but I really just wanted to see if they’d fit. I kinda traced them based on the Jalie jeans I made up, so I think they should, barring any sort of major miscalculations (which I’m rather prone to). I really hope they work out, because I’d really like to have some decent fitting shorts to wear around this summer, and they seem like they’ll go together quickly, and next time should go even faster. This version will be out of some sort of khaki-colored stretch twill-esque fabric that I had in the stash from Whoknowswhere.